In 1888, U.S. Army Chaplain Winfield Scott visited the Salt River Valley, was taken by its beauty, and decided to buy 640 acres to start a farming operation. Scott’s purchase, near the center of present-day Scottsdale, would be the beginning of the city that bears his name. Scottsdale’s favorable climate, well-irrigated desert location and breath-taking scenery stimulated the city’s initial settlement, and while agriculture was the main activity in the early days, many health seekers came to Scottsdale for the dry desert environment.

Construction of the Granite Reef Dam in 1908 and the Roosevelt Dam in 1911 allowed Scottsdale to share in a population boom in the early 20th century as a small market town for families in the agricultural industry.

An influx of artists move to Scottsdale during the Great Depression, including the renowned architect Frank Lloyd Wright, who in 1937 built Taliesin West, his winter home and his architectural firm’s Southwestern headquarters. In 1947, the Scottsdale Chamber of Commerce established a Western design theme for the city’s downtown area and adopted the ‘West’s Most Western Town’ as Scottsdale’s official slogan.

By 2000, the city was home to a population of more than 200,000 residents and saw a significant boom in its tourism industry. Today, the city is a renowned destination and draws more than 6 million visitors annually. Scottsdale is now listed among the 100 largest cities in the country, but maintains its connection to its original small-town, Western desert heritage. 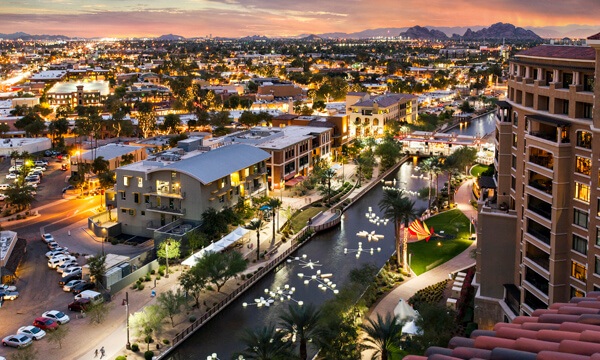 We provide a convenient, no-cost comprehensive service to assist you through every aspect of getting the care you need to speed your recovery and ensure you get the best possible outcomes.

Injury Hotline will begin immediately to help you understand your rights as an injured person in Arizona, and get you the medical care and legal assistance you need.  We are well equipped to help you in every aspect of dealing with your injuries and your recovery. Injury Hotline has the experience and resources to get you the right help and to assist you in navigating the entire process of getting the best medical care, legal assistance, dealing with claims and paperwork, and much more.